Have you seen the Transformer series? Blob loves it! Bumblebee, Optimus Prime, Megatron… Ooh the action and the fireworks! Nothing like it, I say. The way they transform from a car to a mega robot that talks and kicks a** at the same time gives me goosebumps every time I watch it. Like in those movies, man and machine are going to work more closely than ever before. Thanks to the advances in sensor and vision technologies and computing power, a lighter weight, mobile plug and play version of the robot has arrived on factory floors and warehouses worldwide—the Cobots or Collaborative Robots. 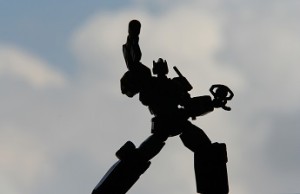 Cobots are meant to replace human jobs that are either too repetitive or dangerous, allowing the human workers to focus on other important tasks. Unlike the industrial robots who operate autonomously or with limited guidance, cobots are designed to work alongside people in a shared workspace and are mobile. Besides being light-weight, cobots are easily programmable, flexible and affordable. Unlike larger industrial robots, co-bots generally cost less than $30,000 a piece. Gee, I think I should buy one. I’m tired of all the heavy lifting. For businesses, the benefits of cobots are already becoming clear. In the next few years, the use of collaborative robots or cobots will rise tremendously in sectors like manufacturing, logistics, warehousing and healthcare. IDC estimates that by 2018, 30% of all new robotic deployments will be smart collaborative robots that operate three times faster than today’s robots and are safe for work around humans. Cobots are especially suitable for small and medium-sized companies, which account for 70% of global manufacturing, as they give human workers new tools to accomplish tasks more quickly, efficiently, and with greater insight than ever before. Amazon set the ball rolling when it acquired Kiva Systems in 2012. Other industrial use cases include DHL’s pilot project with logistics cobot expert Locus Robotics; automakers like BMW, General Motors, Mercedes-Benz and now Ford use cobots in their manufacturing plants. Many companies have created cobots such as ABB (Yumi), Rethink Robotics (Baxter, Sawyer), Universal Robots (UR3, UR5 and UR10), KUKA Robotics (LBR iiwa), Festo and FANUC (CR-35iA, CR-4iA, CR-7iA and CR-7iA/L). Wouldn’t it be cool to have a cobot? Imagine, the things we could do! The cobots can be easily programmed to perform a new task and this makes it possible to achieve a positive RoI within a matter of months. They have the ability to learn easily, adapt to performing diverse tasks, and can complete delicate or intricate tasks through machine vision and sensing systems. They definitely have a positive effect on production. MIT researchers found that cobot-human teams were about 85% more productive than either alone at BMW. Last month, KUKA and SAP announced that they will work together around Industrial 4.0 and Industrial Internet of Things (IIoT) and collaborate in the areas of manufacturing, mechanical engineering and the automotive sector to promote the flexibility and automation of production processes. The impact of robotics is not just in the space of cobots, but also in other areas of IIoT. No wonder then, the estimate for global robotics industry is expected to exceed $151 billion by 2020. The other interesting IIoT trends to watch out for are:

Trend 1: More industrial devices are on the Edge

The edge of IoT is where the action is as it includes a wide array of sensors, actuators and devices that keep communicating with the network in real time. Edge computing represents a shift in computing where intelligence from the Cloud is pushed to the Edge, localizing decision-making and analysis. Since devices are at the Edge, they will not be affected by network latency and the reduced traffic will enable quicker response times by selectively relaying the appropriate data to the cloud. The Edge has more features and performs more functions than any other layer in the network topology.

Across industries, the application of advanced analytics, machine learning, and artificial intelligence is disrupting traditional approaches to manufacturing. Manufacturers can become more competitive by gaining predictive insights into production by using machine learning. By using advanced data analytics and AI, manufacturers can combine inputs from many sensors and comb through the data to find out any equipment failure and other potential problems. Over time, the technology will be able to enhance its ability to detect failures.

Simulator-based training is an effective way of training factory staff. IIoT-enabled technologies such as gaming, augmented/virtual reality, 3D immersive and wearable devices can improve learning and help develop skills by replicating real-life plant scenarios. The applications include testing and validation of software, aiding in system migrations etc. This technology can help manufacturers understand how employees will react in worst-case scenarios and thus plan emergency procedures. Rockwell Automation’s industrial chatbots, Amazon’s Alexa and Microsoft’s mixed-reality Hololens platform are all examples of consumer technologies being used in the industrial realm.

Trend 4: Digital Twins will be the new norm

As IIoT grows, manufacturers will have to spend a lot of time testing new systems on the floor. While connected networks will help, creating digital twins of the products/services and testing them thoroughly in a virtual environment before going live also will help manufacturers avoid downtime problems and save them from committing actual resources. Besides, it will help them in fixing issues on the factory floor before going live and allow for continuous design and manufacturing improvements. The real-time data from integrated sensors can be used for analytic tasks like condition monitoring, failure diagnostics, prescriptive and predictive analytics. I think I would like a twin! It would be so cool to experiment on him.

Trend 5: Cybersecurity will become a must-have

Nearly 96% of security professionals in organisations are expecting increasing cyber-attacks on IIoT infrastructure, according to a survey by Tripwire. While an overwhelming majority felt the need for enhancing the existing infrastructure, more than said they do not feel adequately prepared for such attacks. The recent global ransomware outbreak through the WannaCry virus, which wreaked havoc at dozens of NHS trusts and hit thousands of computers in 150 countries, underscores the need for strengthening cyber security across industries as the number of connected devices increase rapidly. Blob wonder why the authorities called the virus “WannaCry”. Are they asking a question or suggesting the outcome?

Manufacturers should embrace the positive change that IIoT brings and integrate legacy assets with it. IIoT are the Transformers of the Next Decade and Blob feels the action has just started.