When You Run for a Cause—Everyone Becomes a Champion!

“Champions aren’t made in gyms. Champions are made from something they have deep inside them—a desire, a dream, a vision. They have to have the skill, and the will. But the will must be stronger than the skill.”—Muhammad Ali

Weekends are synonymous with fun, and fun’s synonymous with sports. But, when a sport gets entwined with a cause, not just excitement, even gratification knows no bounds.

With that thought, Happiest Minds organized a run, and christened it – ‘Run Miles Bring Smiles’.

It wasn’t just an opportunity to toss away our sedentary lifestyles and connect on a different turf—the running track, but extend our help to the deprived. That’s because the proceeds from the event were to be given to the ‘The Akshaya Patra Foundation (TAPF)’, an NGO that prepares mid-day meals for underprivileged children. Happiest Minds has been contributing to TAPF at every milestone (which we call smilestones) we’ve achieved, since our inception.

The Run was categorized into two formats – 3 miles and 5 miles, for both women and men. And it was open for all, including people from outside the organization. The event saw a participation of around 550 individuals.

Here’s an attempt to paint a picture of the Sunday morning, which got us energized beyond our reckoning.

Happiest Minds volunteers and its core team members had started gathering from before 5 am. A couple of members had been engaged in overseeing the arrangements through the night too.

At the crack of dawn, people started pouring in. By around 5:30 am, the registration began, which was quickly followed by distribution of green colored T-Shirts to the participants.

In no time, the ground was swarming with smartly dressed participants in track pants and green Tees. As they greeted each other, brimming with extraordinary zeal, by the time it was fully bright, it was as if a sea of radiant green had engulfed the grounds, exuding positive energy. Their fervor was easily palpable.

The event began with a 10 minute ‘Columbia Asia talk’, where Columbia Asia Hospital’s Dr. Manu along with Sharon and Sandeep of Happiest Minds, expressed their views.

Soon after that, a Zumba session kicked in where participants dismissed the morning blues by moving rhythmically to techno beats. There was an instructor who was leading the crowd. Though many participants were in a fitness session after long hiatuses, their exemplary enthusiasm and vigorous involvement, was constantly ruling out any impressions of lack of practice.

There were some very interesting participants who had turned up for the event. One of them was a cheerful 5-year-old “Tara” who was certainly the most passionate in the whole lot. Just watching her gyrating to the tunes filled everyone with joy and amusement. The Zumba lasted for roughly 15 minutes. After that, the run was flagged off by releasing green and white balloons in the air, which within moments, became a speck in the sky.

Minutes before the run, participants were seen lacing up their sneakers, adjusting their attire, putting on their headphones (connected to their phones or iPods).

The starting point was the same for both 3 miles and the 5 miles run.

Dust flew off from all quarters when waves after waves of footsteps left the starting line, surging ahead to make it to the finish line. Amidst loads of excitement and delight, cheering and hollering filled up the atmosphere. People could be seen pushing the envelope, confronting their years of inertness with tremendous grit and determination. Their steely resolve to complete the run was apparent in the glint in their eyes.

The participants were from a range of age groups, from twenty-something first timers to veterans, to regular marathoners.

Everyone knew stamina, endurance and willpower would be their closest ally during the course of the run. As the runners made their way down the long winding track, they were greeted by shouts and cheers of encouragement from the bystanders. 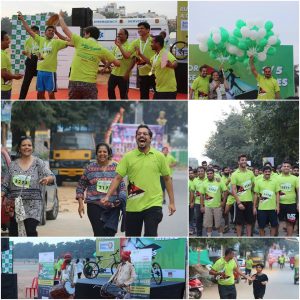 Both the runs lasted for roughly 45 mins to an hour. Everyone from walkers to joggers to runners to elite runners rubbed shoulders with each other. And since everyone was in it for a cause, everyone had an extra reason, an extra purpose, and extra motivation up their sleeves.

By around 7:30 am, every last runner had hit the finish line. And winners had emerged in both 3 miles and 5 miles formats, in both men and women categories. The event saw a mix of expected and unexpected winners. There were some laudable performances by the first timers.

Soon after the run, participants came back and had breakfast. The feeling of accomplishment was apparent on their worn-out faces. Every morsel of food accompanied a sense of gratification of being associated with the cause.

It was around 8:30 am and the time had arrived for the last leg of the event—the prize distribution. Individuals who had stood 1st and 2nd, in both 3 miles and 5 miles in men and women categories, were felicitated. They were handed over Xiaomi MI Bands, the wearable fitness trackers. However, the ones who stood 1st in the 5-mile event in both men and women categories, were rewarded bicycles. 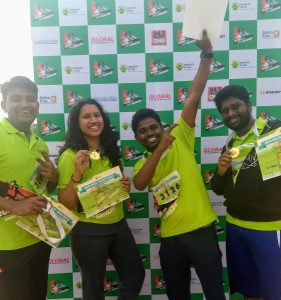 is the Vice President & Happiness Evangelist at Happiest Minds Technologies. She believes that happiness enabling practices must be built on strong conceptual frameworks and that happiness and mindfulness enabling strategies must filter throughout the organization across its business operations.

Sharon has hosted and participated in various workshops and seminars throughout the country. She holds a PhD in the area of Servant-Leadership, an MPhil in Entrepreneurship and an MBA from Bharathidasan Institute of Management, Tiruchirapalli.

Sharon’s interests are in mentoring, counselling and recently, painting.

Sharon Andrew-Rajkumar, PhD is the Vice President & Happiness Evangelist at Happiest Minds Technologies. She believes that happiness enabling practices must be built on strong conceptual frameworks and that happiness and mindfulness enabling strategies must filter throughout the organization across its business operations.

Sharon has hosted and participated in various workshops and seminars throughout the country. She holds a PhD in the area of Servant-Leadership, an MPhil in Entrepreneurship and an MBA from Bharathidasan Institute of Management, Tiruchirapalli.

Sharon’s interests are in mentoring, counselling and recently, painting.

The Necessity Of Happiness At Workplace

Understanding Web 3.0 and its most immediate areas of impact

In the era of AI and ML, is PHP dying?