Hey guys I am back! Look who I brought with me today: Mr. POTUS himself!

President Donald Trump walked into office talking about fighting terrorism and also making America secure and safer for its people. While there are still doubts on the extent to which Trump will keep his promises, most cyber experts are optimistic about the increased spending in the security space. In an evolving threat landscape against the background of political parties being hacked and accusations of hacked rigged & Russia influenced election results, Trump has spoken about securing cyber security from potential attacks from terrorist groups like ISIS for the government and the people of America at all costs. 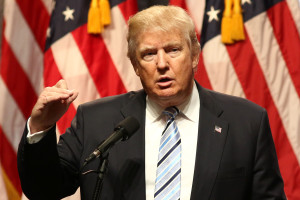 Given Trump’s focus on fighting terrorism during his presidential campaign, he’s likely to push for greater surveillance powers. Last I heard from my friends inside the White House, the executive order from the President’s office is not official yet and the delay is making people wonder as to which direction the administration wishes to take. In a leaked version of the order, Trump had recommended making department heads of government agencies responsible for the cyber security of the departments under their care. “We must protect federal networks and data,” Trump added. “We operate these networks on behalf of the American people and they are very important. We will empower these agencies to modernize their IT systems for better security and other uses.” Trump is likely to look for ways for the National Security Agency and other agencies to assist the government and companies defend against cyberattacks, said Jeffrey Eisenach, a visiting scholar at the American Enterprise Institute and a tech adviser during Trump’s presidential transition. Federal, state and local governments are often relying on out of date or incomplete intrusion detection and mitigation technologies. Industry experts opine that in order to combat the growing cybersecurity threat there should be at least 20% of their budget set aside for it.

How Big Will Cybersecurity Be?

Now, this bit is interesting. According to Cybersecurity Ventures, “Cybercrime damages will cost the world $6 trillion annually by 2021. The cybercrime cost prediction includes damage and destruction of data, stolen money, lost productivity, theft of intellectual property, theft of personal and financial data, embezzlement, fraud, post-attack disruption to the normal course of business, forensic investigation, restoration and deletion of hacked data and systems, and reputational harm.” Let us take a look at a TED Talk by Caleb Barlow, on “where is cybercrime really coming from?” This will give us a perspective on the scale and nature of the problem.

So, how much would the industry spend to protect itself from the above? Cybersecurity Ventures predicts global cybersecurity spending will exceed $1 trillion from 2017 to 2021. Here is more from their Q1 2017 report

“While all other tech sectors are driven by reducing inefficiencies and increasing productivity, cybersecurity spending is driven by cybercrime. The unprecedented cybercriminal activity we are witnessing is generating so much cyber spending; it’s become nearly impossible for analysts to accurately track.We anticipate 12-15 percent year-over-year cybersecurity market growth through 2021, compared to the 8-10 percent projected over the next five years by several industry analysts.

IT analyst forecasts are unable to keep pace with the dramatic rise in cybercrime, the ransomware epidemic, the refocusing of malware from PCs and laptops to smartphones and mobile devices, the deployment of billions of under-protected Internet of Things (IoT) devices, the legions of hackers-for-hire, and the more sophisticated cyber-attacks launching at businesses, governments, educational institutions, and consumers globally”

Who benefits the most?

There is a high business potential in replacing legacy technologies that currently dominate the government and commercial space as we move to more complex cyber security systems and also include overall IT security into the space owing to how connected every system is today. The short or long term strategy for cyber security investments will focus on cyber security infrastructure development, centralized integrated system development and next generation end-point solutions. According to Reuters, companies tipped to gain the most from these developments include Israeli firms such as Elbit Systems, Magal Security Systems and Check Point Software Technologies, all of which have US subsidiaries. “Clearly, if spending goes up for cyber security or for border security or for defense, this is going to probably help Israel’s tech industry. Israel is strong in all of these areas,” said Jon Medved, CEO of equity crowdfunding firm OurCrowd.

Weaponising data will become the new normal and attacks are moving to a more stealth format which has everyone fretting. “In 2017 and beyond, the use of sophisticated prevention technology and tactics including threat intelligence, machine learning and managed hunting, will be the only combination of tools to truly support enterprises in predicting, detecting and preventing damaging intrusions,” comments Nick Ismail from Information Age. This fear is driving the US towards becoming a protectionist regime then cyber security firms can expect a windfall in the near future.

Experts opine Cyber Security Analytics is a complex process and most are skeptical that government agencies may not be up to the task of handling the implementations themselves and bringing in corporation and entrepreneurs is the best way to go in order to ensure the kind of surveillance envisioned by Trump.

Those in the Cyber Security business, rejoice. Everyone else… stay safe!

Influence of Artificial Intelligence on DLP

Celebrating the Pride Season: Spread the message of Love