Part II – You’ve got to know DISCO to make the right moves in Networking!

In the first part of this blog, we engaged in some wordplay, established how DISCO is important in the world of networking and delved a bit further into Disaggregation and Intent Based Networking. In the follow up, we are going to be looking at the other three elements that are just as crucial. So, let’s get right into it.

While we talked about Disaggregation and Intent Based Networking, it’s important to realize that none of these movements would have been as successful, if there was not a killer use case. And there isn’t too much debate about SDWAN being the most successful use case of SDN that has resulted in building SDWAN solutions which have Disaggregation and Intent Based Networking at its core.

The way SDWAN has evolved over time, the basic use case of traffic steering based on applications to save MPLS costs looks pre-historic. The demands of enterprises today are much beyond that, including but not limited to:

To realize these requirements, a siloed approach would fail and a blueprint, driven by Open API is required. MEF has taken giant strides towards the same and released specifications (MEF70) which are aimed to create a standardized and certified SDWAN services and service orchestration.

A desired blueprint of such a solution is depicted below. This approach is supported by many leading vendors and is slated to move into production very soon. 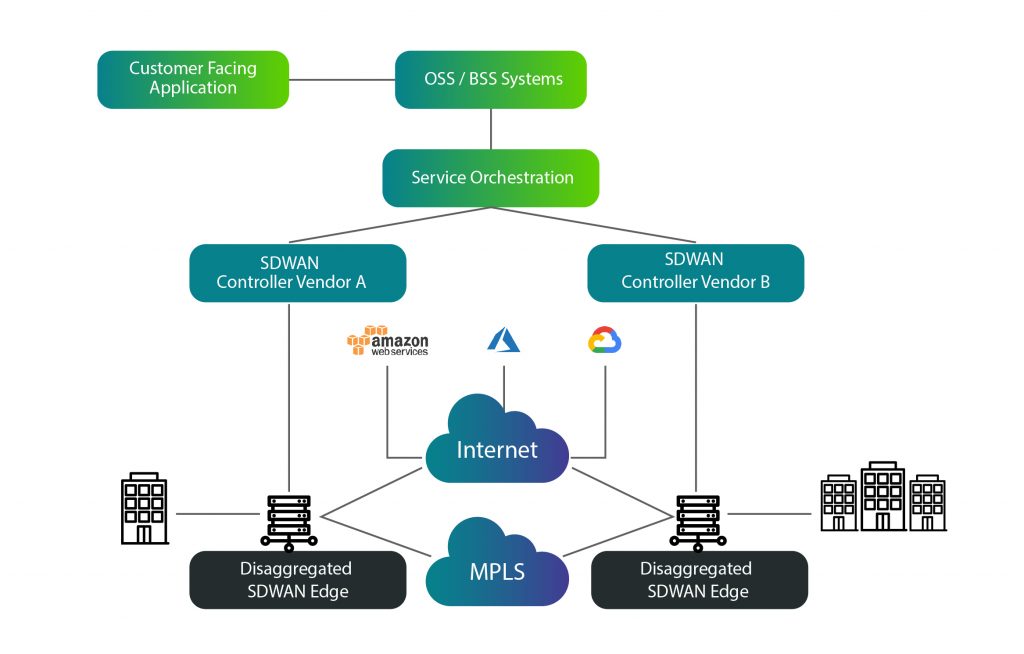 At Happiest Minds, we have been fortunate to be one of the early implementors of SDWAN. We started with a PoC using a humble Raspberry PI as the edge device and building an SDWAN App on the ODL controller. This has evolved into a large-scale implementation with a customer portal, integration with order fulfilment systems, predictive analytics to manage traffic based on the predicted network performance indicators and one touch connectivity to cloud providers with automated circuit configuration and API integrations.

It is a bit ironic that the Networking and Telecom industry has always been lagging the cloud even though it’s the high-performance networking at lower cost provided by service providers that has enabled the success of the cloud. Now it is time to return the favor, with cloud architecture adoption enabling success of the networking and telecom operators.

Large operators have almost met their goal of virtualizing a certain part of their networks. For e.g. AT&T has about 65% of its network disaggregated and virtualized and is aiming to touch 75% in 2020, which is as per the plan published by AT&T in 2017. At the same time, with 5G and Edge, there is an industry effort towards containerization of virtual functions in line with the cloud model.

Of course, security isolation is a key challenge for container functions and hence a careful selection of a combination of VNFs and CNFs are required for deployments using technologies such as Kubevirt. With appropriate service chaining and orchestration, the containerized network functions can be used for agile and flexible service delivery at optimized performance and cost.

The solution comprises of a containerized deployment of open source edge solutions, such as EdgeXFoundry and the underlay network infrastructure with functions of firewall, load-balancer and telemetry. Moreover, this architecture is flexible, as adaptors, such as protocols or management interfaces for specific use cases can be plugged into the architecture.

A large portion of a service provider’s network is based on disaggregated systems on the edge, virtualized at its core and intent driven. No single vendor or open source project can have a solution addressing all of these and hence it is imperative that the networks of tomorrow would be more diverse, with multiple vendors, open source and inhouse solutions coming together. It would become extremely cumbersome to manage these diverse elements akin to the instruments in an orchestra. The need would be to ensure that the diverse components work together to create music, not noise which can be taken care of by an orchestration solution.

Orchestration provides the agility to enable services on demand, allowing updates and changes in real time, and adapt to the changes in network condition. The key driver here is optimization of services linked to business benefits for operators.

A good Orchestration solution should have the following components:

Happiest Minds has engineered an IoT enabled smart home solution for a leading operator in Europe. The solution has an IoT platform with IoT device orchestration capabilities, which also interacted with the SDN underlay managed by multiple controllers. Happiest Minds is also developing an Edge Orchestrator, aligned to the SEBA – CORD architecture for a leading OEM.

Now that we have delved into every element of DISCO, it’s safe to say that telecom providers and enterprises would need to adopt these evolving programmable networking technologies to meet the demands of agile and flexible services that need to be delivered with rich customer experience and low costs.

On paper, this might seem like quite the song and dance but mastering this DISCO can start one small step at a time and we are here to help you groove to the beats of change.

heads the DCT group at Happiest Minds and is responsible for driving strategy, execution, business and technology across the desired market segments. With over 15 years of experience in Networking technologies, Dharmraj’s current areas of interest are SDN and NFV and the co-creation of solutions in this space with OEMs, TEMs, ISVs ISPs. Dharmraj’s experience includes packet processing on Broadcom, Cavium and other proprietary ASIC and NPU platform, control stacks from Level 7, GateD, and Nortel Networks proprietary and management plane.

Dharmraj Jhatakia heads the DCT group at Happiest Minds and is responsible for driving strategy, execution, business and technology across the desired market segments. With over 15 years of experience in Networking technologies, Dharmraj’s current areas of interest are SDN and NFV and the co-creation of solutions in this space with OEMs, TEMs, ISVs ISPs. Dharmraj’s experience includes packet processing on Broadcom, Cavium and other proprietary ASIC and NPU platform, control stacks from Level 7, GateD, and Nortel Networks proprietary and management plane.

Smart Manufacturing in a world of Social Distancing

You’ve got to know DISCO to make the right moves in Networking!

B2B2X – the key for Telecom operators to rise above Xpectations