You’ve got to know DISCO to make the right moves in Networking!

Now that I have your attention, let me assure you that you don’t need to dust off your glittering shirts or bellbottomed trousers from the attic and step on the dance floor. Any references or similarities to the dance subculture that swept through the 70s are purely coincidental and at best an attempt at showing off some inspired wordplay. With that disclaimer out of the way, let’s get down to understanding what DISCO means in this context and how it can help you make all the right moves in the world of Networking.

It is quite well known that there is a transformation afoot in the Networking industry that has been a long time coming. In fact, it has been estimated that 70% of large and mid-sized enterprises are likely to rework their networking setups over the next three years. Given this context, it is important to understand the drivers of this change – Disaggregation, Intent Based Networking, SDWAN, Containerization and Orchestration. Or DISCO – I told you it all adds up.

I’m going to touch upon each of these elements in a two-part blog. I shall cover Disaggregation and IBN below and you can go through the remaining three elements in part two.

Disaggregation of compute systems is a pretty old phenomenon. When I started my career in the year 2000, our infrastructure largely comprised of integrated hardware and operating systems such as HP-UX, Sun-Solaris and so on. However, this changed rather quickly and we soon had servers which could support several flavors of Linux, allowing users to choose an OS they preferred.

Like most other things, Networking took a while to latch on to this very concept but I remember back in 2013 when Cumulus Networks started using this term.

Soon after, Disaggregation started gathering more momentum with the development of programmable silicon from companies like Barefoot, Cavium and Innovium along with the emergence and acceptance of standardized interfaces through SAI (Switch Abstraction Interface) developed by the efforts of various members from the Open Compute Project.  These silicones allow a fully programmable Dataplane, that can be updated in real-time, using a combination of Dataplane programming frameworks like DPDK, Domain specific language like P4 with components like P4 Runtime or SDKs implementing the SAI APIs.

The advantages offered by Disaggregation are quite apparent – prevention of vendor lock-in, low cost commodity hardware & extreme flexibility. But like someone once said, there are no free lunches and these advantages come with additional investment in engineering talent to manage and support the disaggregation. However, in the hybrid cloud world, the biggest advantage that Disaggregation can offer is the ability to have a single unified network software workload, that you can run on your own hardware in a private or public cloud.

Some of the key leaders who have contributed to Disaggregation are Edge-Core, DELL, Arista Networks, Cisco, Facebook, Microsoft, Barefoot, Broadcom, Centec, AT&T and IPInfusion thus ushering an era of branded white box disaggregation deployments. Here are some examples: In one of the projects that Happiest Minds executed in 2019, we worked on engineering a SONiC / Broadcom based disaggregated switch with FRR as the routing stack and features such as EVPN.

In addition, our engineers have been playing around with DANOS, a networking OS open sourced by AT&T, and have made contributions to it as well. As a company, we are well positioned to leverage our engineering expertise in making our clients’ disaggregation journey smooth, seamless and accelerated.

Ask anyone about the toughest job in Enterprise IT, and it would usually be defining, configuring and monitoring of enterprise networks. To put it plainly, it’s a complex task and the consequences of mismanagement could run into millions of dollars.

Using Intent Based Networking, along with the advances in AI / ML, SDN, NFV & IoT can make the network very flexible, that too in real time. The bandwidth can be spruced up or down, new network appliances can be turned on or shut down, network services can be instantiated based on the dynamic business needs to operate the network in the most optimal way, without errors. 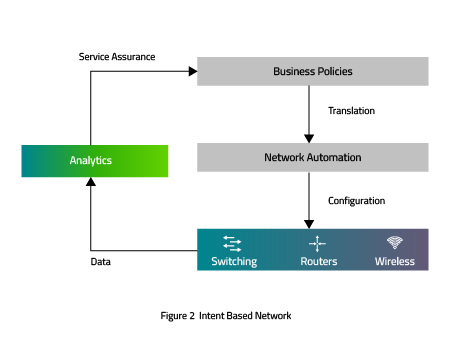 The highest uptake of Intent Based Networking can be found in SDWAN but isn’t restricted to it. There has been a lot of traction at MEF with leading technology companies working towards standardization of LSO CANATA APIs and building domain specific intent language, using restricted natural languages.

As per industry estimates, Intent Based Networking Market, which was 700M$ in 2018, is expected to grow at a CAGR of 30% touching 4B$ by 2025. All the leading technology vendors such as Cisco, Juniper, Huawei and emerging vendors such as 128 Technology, Pluribus, Avi Networks are providing solutions in the IBN space

Be sure to check out Part II of this blog where I talk more about SDWAN, Containerization and Orchestration to be up to date with your DISCO move set!

heads the DCT group at Happiest Minds and is responsible for driving strategy, execution, business and technology across the desired market segments. With over 15 years of experience in Networking technologies, Dharmraj’s current areas of interest are SDN and NFV and the co-creation of solutions in this space with OEMs, TEMs, ISVs ISPs. Dharmraj’s experience includes packet processing on Broadcom, Cavium and other proprietary ASIC and NPU platform, control stacks from Level 7, GateD, and Nortel Networks proprietary and management plane.

Dharmraj Jhatakia heads the DCT group at Happiest Minds and is responsible for driving strategy, execution, business and technology across the desired market segments. With over 15 years of experience in Networking technologies, Dharmraj’s current areas of interest are SDN and NFV and the co-creation of solutions in this space with OEMs, TEMs, ISVs ISPs. Dharmraj’s experience includes packet processing on Broadcom, Cavium and other proprietary ASIC and NPU platform, control stacks from Level 7, GateD, and Nortel Networks proprietary and management plane.

Smart Manufacturing in a world of Social Distancing

Part II – You’ve got to know DISCO to make the right moves in Networking!

B2B2X – the key for Telecom operators to rise above Xpectations