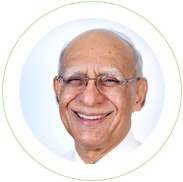 Ashok Soota, Executive Chairman, Happiest Minds, a next generation IT Services company, is widely recognized as one of the pioneering leaders of the Indian IT industry.

Prior to founding Happiest Minds in August 2011, Ashok led the growth of Wipro’s IT business from US$ 2 million to US$ 500 million run-rate. Subsequently, he was founding Chairman & MD of Mindtree and led it through a very successful IPO. His second entrepreneurial venture, Happiest Minds has already established several benchmarks in the IT Services industry in India and is on course to achieve its goal of being the fastest to achieve US$ 100 million revenue.

Ashok began his career in 1965 with the Shriram Group of Industries in India. In 1978, he became CEO of Shriram Refrigeration, a company which was unprofitable for four straight years. Ashok facilitated a complete turnaround, making it profitable in his very first year and taking it to a position of leadership in each of its product lines.

Ashok is a leader of industry. He was President of Confederation of Indian Industry (CII), India’s largest Industry association and also President of Manufacturers’ Association of Information Technology. He has served on the Prime Minister’s Task Force for IT and on the Advisory Council for the World Intellectual Property Organization, Geneva. For his contributions to India’s IT industry, he has been recognized twice as IT Man of the Year, also as Electronics Man of the Year, and recognized at Infocom 2013, Kolkata, as one of the 12 Gems who helped to build Indian IT Industry. The companies he has led have created about 25,000 jobs during his leadership tenure.

Ashok’s philanthropic contributions are channeled through Ashirvadam, a Trust he has created for Environmental Protection and help for the needy including vocational training, education and medical assistance.

Ashok holds a Bachelor of Engineering degree from Roorkee University (now IIT, Roorkee) and an MBA from the Asian Institute of Management, Philippines. He is a Fellow of INAE. Ashok’s hobbies include trekking, the outdoors, yoga, taichi and meditation.