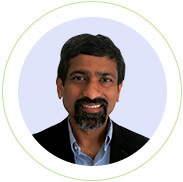 Joseph has over 25 years of professional experience, the majority of which has been focused on helping technology and digital engineering companies unlock new levers of growth. In 2011, Joseph became one of the co-founders of Happiest Minds and currently serves as its Executive Vice Chairman and a member of its board. At Happiest Minds, Joseph has played a key role in establishing the Product Engineering business unit, which helped in substantiating the company’s digital credentials and contributed towards a highly successful IPO.

Prior to Happiest Minds, Joseph owned the P&L responsibility at Mindtree for the Microsoft Strategic Business Unit that contributed 8% of the company’s revenues at the time of his departure. In this role, Joseph devised and implemented a strategic program that resulted in Mindtree establishing themselves as one of the largest vendors of Microsoft while becoming their engineering partner of choice.

Joseph joined Mindtree through its acquisition of Aztecsoft, where he was first responsible for making inroads into Microsoft and rapidly scaling it into a multimillion-dollar account. During his combined association with both companies, Joseph was instrumental in winning several large deals while contributing across complementary areas like strategy formulation, customer engagement and strategic marketing.

Before making his foray into the world of technology, Joseph spent the early part of his career in banking and manufacturing, which has allowed him to develop a broader perspective.

Joseph holds a Bachelor of Engineering degree from BITS Pilani and a PGDM from IIM Ahmedabad.

Apart from the satisfaction and happiness he gets from engaging and collaborating with people and customers, Joseph enjoys time with family, running, cooking, political analysis and passionate debates.