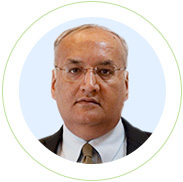 Rajiv Shah is an accomplished Senior Executive with more than 30 years of success across the healthcare, financial services, technology, travel/transportation and software industries.

He has held leadership positions at Electronic Data Systems (EDS), Wipro Technologies, IBS Software Services and Mu Sigma.  Prior to joining Happiest Minds, he has been advising Founders and CEOs of start-ups and early stage companies.

As a CEO and Executive Director of IBS he was responsible for turning around the company from consistent losses to a highly profitable organization, driving 40% EBIDTA, doubling revenue per employee, and achieving 400% improvement in both pre- and post-tax profits while enabling expansion into new global markets. He also engineered the change in business model from on-premise to SaaS.   In his prior roles, Rajiv led Financial and Healthcare Business Units at Wipro, oversaw the establishment of international operations of EDS, established a JV between one of the largest US BPO companies (TeleTech) and Bharti group, and established new entity for an Australian Conglomerate – Kerry Packer Group. After establishment, he ran these businesses as CEO.

Rajiv has lived and worked in various parts of the world and holds MS in Mechanical Engineering from the University of Missouri.