Due to constant growth in user traffic and digital transformation happening across various industries, Telecom Service Providers have to address this demand with continual investments in network scalability. They usually have a diverse set of proprietary hardware which hosts individual network components and consumes considerable amount of space, power and skilled resources necessary to integrate & operate the hardware. All these factors lead to a significant increase in OPEX & CAPEX from operating and maintaining complex hardware based network elements. Moreover, these hardware-based network elements rapidly reach EOL (end of life), requiring much of the procure-design-integrate-deploy cycle to be repeated with little or no revenue benefits to TSPs.

Happiest Minds Technologies has been working on creating test, validation and test automation frameworks and accelerators as part of the Datacenter Testing service offerings portfolio. This covers verification and validation of the NFVI, NFVO and VNF, VNF-VNFM, MANO and all the other layers of the ETSI NFV reference Stack.  The testing phases covers Test planning, Test Labs/scenario setup, Test Execution and Test Report. The Test types covered are Dev-Test, Functional Test, System Test, Performance and customer use cases validation apart from First Office Application (FoA) support.

Network Function Virtualization (NFV) is an initiative driven by ETSI NFV ISG to help reduce the above complexities caused by diverse hardware, by running vendor applications on common commercial, off-the shelf (COTS) hardware by leveraging standard IT virtualization technology to consolidate many network equipment types onto industry standard high volume servers, switches and storage, which could be located in data centers, Network Nodes and in the end user premises. Furthermore, is expected to deliver three significant benefits to service providers: improved service agility, reduced equipment expenditure and improved operational efficiency. Of these, service agility appears to be to the key benefit expected by the industry.

Happiest minds have been part of these projects in NFV area:

A detailed Datacenter Testing Offering overview focused on NFV is provided in the figure below with a direct correlation to the ETSI NFV ISG standard. 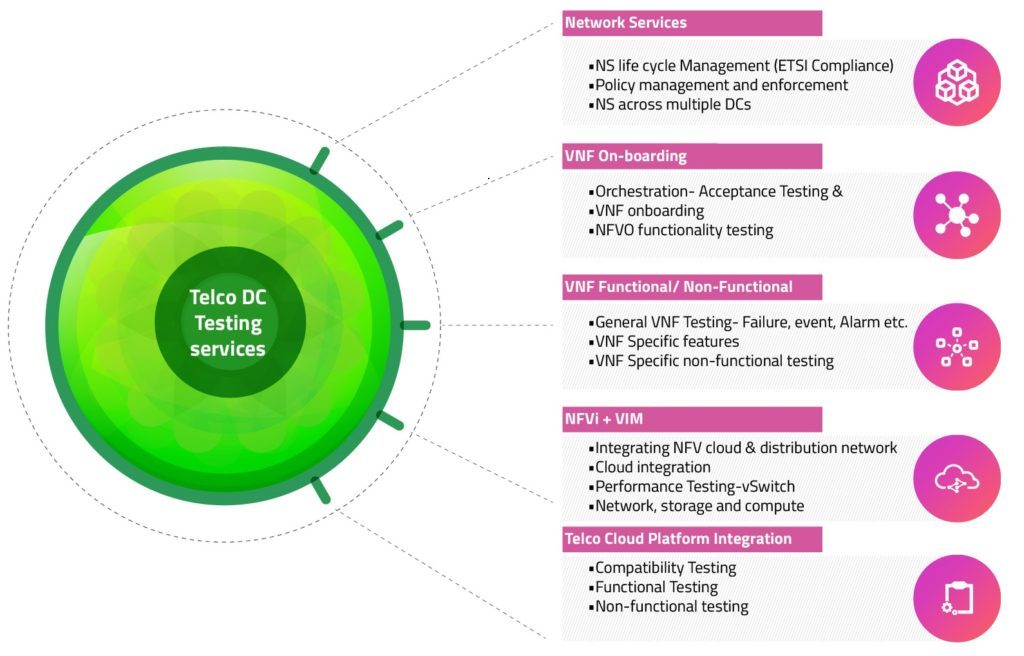 A summary of the SDN Test approach is mentioned.

Happiest minds have been part of some key projects in SDN area:

The need of the hour is a new software-centric architecture based on SDN and NFV....

Mobility is considered as the most disruptive technology innovation...

Today, the way we do things is completely reliant...